This weekend my son went to his Blue and Gold Banquet for his cub scout pack. We all had a blast and enjoyed it tremendously! I'm telling ya.. IF I ever played the lottery, HE would pick the numbers. This kid has a lucky streak that neither his daddy nor I have ever had. When he was 18 months old we put his name in the drawing at a local church event. They wanted to know who all had come etc and guess what! The child won a bicycle and helmet when he was 18 months old!!! SHEESH!

Well that story is told to tell this one. We bought some raffle tickets because we are helping the cub scouts right? Well that child won three times when the numbers were drawn! We gave the third one to someone else but he won a water gun and a bag of popcorn lol! Wahoo! He was having a blast

Saturday he received several awards for his adventures the past couple of months and one of those was his Tiger Badge. He has worked hard to get that badge and I'm super proud of him. Here he is watching the magician and having fun! 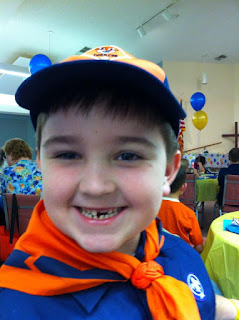 I hope you have a wonderful week ahead. We will be getting ready for company coming in this weekend and lots of stuff ahead. Next Monday is Boo Bear's surgery. Please keep us in your prayers! Have a blessed week and keep your eye out for some reviews coming up!
Posted by Jen at 6:00 AM