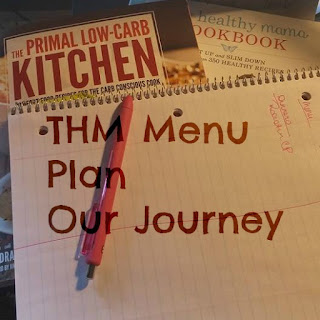 Howdy!! How are you all doing this week? This is a little bit behind, but better late than never, right?

So I'm doing a THM update this week and sharing our menu plan for the week. I'm finding it much, much easier if I plan out a menu and have it all ready to go than if I just try to buy random ingredients. I mean really.. Random ingredients gets me into all kinds of trouble!!

So for an update on how I'm doing... I've lost another pound! Wahoo! I know, I know.. A pound doesn't seem like a whole lot but guess what... I used to think that too. I saw something the other day that really hit home with me. Instead of saying I ONLY lost a pound... I'm saying Wahoo! I lost a pound :). Why? Because if all I lose is a pound a week for the next year, that's 52 whole pounds gone in a year!!! So no more downing myself if I "only" lose a pound or not even a pound in a week's time. This is a lifelong journey to health. This is not a diet. Ya know?

So anywho!!! I'm finding things to be a little easier as I move through the weeks. We've been on THM, Trim Healthy Mama, for about two months now. I on plan more than my hubby or kiddo. They eat what I fix and of course we tweak it for them. For example, last night I made Philly Cheesesteak in a bowl and they had theirs on bread. I'm also learning how to give myself grace. This past weekend was my son's play weekend. We were on the go constantly for dinner. Thankfully I could get a salad one night and the other night where it was a hit or miss, I gave myself grace. That's what this is all about. Food freedom and grace!!

Now we can get to the meal plan for this week. As I mentioned I made Philly Cheese in a bowl last night so that was on the plan. I have some other fun stuff planned for this week and some different things too. I have about a month or more menu plans together now so I am getting to where I can go pull things I know we like and add in a new recipe once a week or so. It helps me to get things in a rotation and also to know what we like and what we might want to skip over.

Here's the plan for this week:

I'm also trying to figure out how to do this on a tighter budget. I have about the same grocery bill every week now and I'd love to see it drop a little (or a lot). Let's face it. Groceries are expensive so anyway we can cut down on it, I'm all for it :)

I can say that menu planning such as this does seem to keep my budget about the same for each week. That part is nice because I know how much I'm going to spend before I get there. I am going to try going to Aldi's more. They are building one closer to my home but I have one a little farther away that I do enjoy going to. It is much cheaper on some of the THM things so I'm going to see if I can do it there or if Wal-Mart is where we're stuck :).

What's on your menu for the week? Any yummy recipes I should try out? Let me know!!!
Posted by Jen at 7:47 AM