When God Tells You to Go... 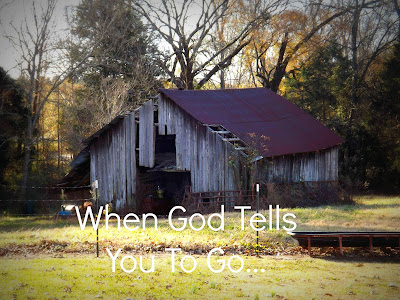 There have been a few times in my life where I knew that I knew that God was telling me to take a step. Make a change. Trust in Him and Him alone to step out into this new adventure that only He knew the end result.

Those times have been few throughout my life but they have been quite impactful. There are some changes taking place around our family and God is moving in ways that none of us could have imagined. No, we are not moving but some of our family is making a huge decision on major changes. Throughout this whole process it has been an emotional roller coaster of questions, concerns, what is the "right" thing to do. That is a normal part of the human experience. What I want to focus on is something that has been floating around in my heart through all of this... Something that is never easy but always worth it. Something that can be scary, exciting, frightening, and make you shake your head in wonder... When God says it's time to go...

We can see Him do this a lot in the Bible. People were told to go many times. Some listened and the journey was amazing. Some didn't listen and there were unpleasant things that took place (think Jonah and the whale). One thing is for sure. When God tells you to go somewhere, do something, change something, He's there with you every single step of the way.

One example that stands out in my mind is the story of Abraham. In Genesis 12:1-2 God calls Abram to do something totally out of the box.

"Now the Lord said to Abram, 'Go forth from your country, And from your relatives and from your father's house, to the land which I will show you; 2. And I will make you a great nation, and I will bless you, and make your name great; and so you shall be a blessing..."

Jesus called the disciples to leave their lives behind and follow Him as he spoke and taught the others about the grace and peace He offered. They left behind their jobs, their homes and followed Him. Was it scary? Probably. Was it a little crazy? Sure. But oh the reward and blessings they received as they walked with Jesus and experienced the miraculous things He did.

I can tell you myself that there have been a few distinct times in my life where God told me to go. When I was a young adult, in college, I was battling with God, and my parents, on a move that they had intended to make. I was making life difficult for everyone because I was NOT leaving my home to go somewhere I knew no one anymore. I was NOT going to change everything I wanted because someone else chose to take a different path.

You know those times that God just gets a hold of you and shakes you? Or maybe it's like a Gibb Slap to the back of the head? (Watch NCIS if you don't know what I'm talking about) Yeah. Those times. I had one of those. I had a sermon that was directed to me and no one else in the room, or at least that was how it felt. God was telling me to go. So, I did.

There have been other times that I have known beyond a shadow of a doubt and other times that I've known but not as firmly. I believe those times are the ones where we walk in faith and see our faith grow even more as God shows us along the way we are heading in the right direction.

See, it takes a lot of faith to take those steps that seem dangerous, scary, and unfamiliar. It takes a lot of faith to say, "Ok. God. You have my attention and I'll go because You say it's time." Sometimes we get huge signs and wonders showing us this is it. Other times it comes in the quiet moments of peace and looking back over the events that led you to the place you're in.

"By faith Abraham, when called to go to a place he would later receive as his inheritance, obeyed and went, without knowing where he was going. By faith he dwelt in the promised land as a stranger in a foreign country..."

By faith... Sometimes, no a LOT of times, we have to take it on faith. God knows what's best for us even when we don't know what's best. He sometimes speaks to us through preachers, friends, the Word, or in little whispers that come from prayer time or just things people say off hand that confirm what you know.

If God tells you to go, go. You may be going to a foreign land as a stranger and are afraid of the unknown. Maybe you're stepping in faith into a new ministry and you're wondering what God was thinking when He told you to go there. Perhaps you're taking a step of faith in your job, your home, or even your family. Whatever it is, when God tells you to go, it is time to go. Your journey ahead is going to be amazing and new. Will there be scary moments? Will you wonder what did you get yourself into? Sure. It's human nature. But the spirit man says, have faith. God's got this. He knows better than we ever could imagine.

Have you ever had times where God told you to go and you had to step out in faith?