So, unless you've been hiding in a hole somewhere lately, you know that Hurricane Irma has been bearing down on the state of Florida for a week or more. Sunday morning it moved onto land. When you're staring down the barrel of a Cat 3,4,5 hurricane, many things go through your mind. Many things weigh on your heart and you're faced with life changing decisions at every turn.

This is the first major hurricane we've had in Florida since we moved 9 years ago. We've had minor things come up or down one side of the coast or other that wasn't much to worry about. Yes it caused some flooding and things, but we've never faced a Category 5 storm that looked to hit Florida head on.

Now, we have. Just in case you haven't seen the shot, this right here says it all... 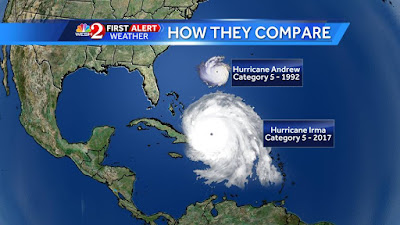 Hurricane Andrew was one of the worst storms that hit Florida until, September 10, 2017. For more than a week I've faced the news with worry, concern, prayers, wondering what to do. Do you stay? Do you go? Many people evacuated from one coast to the other only to find they evacuated right into the path the storm was taking.

Thankfully there were thousands of prayers going up all over the world. I mean thousands, maybe even millions that were going up for the state of Florida. For the storm itself to reduce/dissipate, calm itself down before it hit landfall.

This past weekend we boarded up the windows of our home. I put things in bags to protect them should the water decide to come in instead of staying out. We got our supplies and we hunkered down to prepare for the worst storm ever. 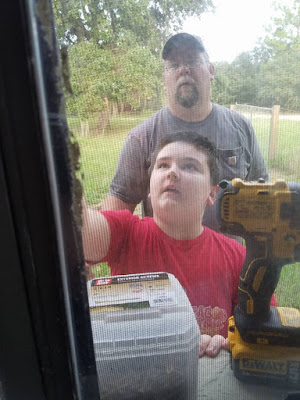 So, through all of this, I've learned some things. Some valuable lessons to take with me from now on out.

1. Stress wreaks havoc on your body. Yeah I kind of knew that, but the past week has been crazy. Headaches days before the storm that were rough, having breakouts because I've been stressed, no sleep for days can really take a toll on you.

2. Being told to get ready for mass destruction is something you never want to face. It really isn't. I did find one weatherman that I felt comfortable watching as he seemed to keep it real. If he was panicked/nervous, you knew to be nervous.

3. When born and raised Floridians get nervous, it's time for you to get nervous. Course, I was nervous before then but Florida folks don't typically run from a hurricane. Until now.

4. Just because the storm is over, doesn't mean the rest is. I have had bad dreams about the past week. People are still without power, us included. People have lost everything they ever owned. Some have even lost their lives.

6. God is still in the miracle working business. The weatherman here I watch said it best. He said there's no other explanation for why this Cat 5 storm that has been raging for so long reduced like it did other than the massive amount of prayers going up. There's no way to get around that. God took care of Florida that there wasn't anymore destruction than there is.

7. I've never felt so emotionally raw before in my life. Listening for days on end that this is the worst, baddest, biggest storm in history can wreak havoc on your emotions. Trying to make sure you and your family have the basic necessities to live without power for several days is nerve wracking when thousands of others are doing the same thing. Facing the unknown as you listen to the fact that the wind speeds are 100+ miles an hour and they are bearing down on your home.

8. Wind is scary. No matter if you're inside a strong building or not that storm was something that scared me to listen to. I didn't sleep at all. I was praying all night long to be honest. As I listened to the winds whip around our home, the pouring rain, and no power. It was something that you can't truly prepare yourself for until you're in the middle of it.

I know there's more to say but right now that's all I got. Please, if you're out of Florida, pray for the state. The cleanup is massive, people are on day number 4 or 5 without power, cell service, internet etc. Don't take anything for granted. Be grateful and thankful for all you have. Keep your prayers going for this state and all those affected by Hurricane Irma, and those by Hurricane Harvey. We all need them. We will recover. We will move forward. Things will get back to "normal" eventually for most of us. We will remain... Florida Strong.

Email ThisBlogThis!Share to TwitterShare to FacebookShare to Pinterest
Labels: 1000 gifts